In the early hours of the morning on Friday 7 June 2019 there was a three car crash on on the Westbound carriageway of the A4 near the Hammersmith Flyover in London. The Met Police, London Fire Service and London Ambulance Service were all in attendance at the fatal incident where one person died.

As is procedure at any fatal traffic accident the road was closed while investigations took place. It was believed as many as nine vehicles were driving in convoy at high speed and the person who died was an innocent member of the public, driving lawfully, caught up in the event – the Met Police made an appeal for witnesses here.

The road remained closed into the morning and as commuter traffic picked up in the area delays were felt. It was re-opened at around lunchtime and the heavy build-up of traffic began to clear with agencies tweeting thanks to people for the patience in the situation. 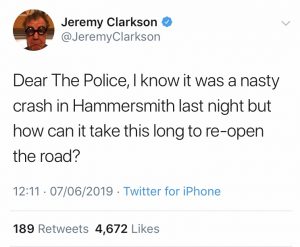 Most of us finding ourselves caught in jams due to an accident resign ourselves to the wait while being thankful we weren’t involved, perhaps thinking of those who knew the deceased who would be getting life-changing news. But TV presenter Jeremy Clarkson, who finding himself delayed on Friday morning felt differently and tweeted to his 7.1 million followers: “Dear The Police, I know it was a nasty crash in Hammersmith last night but how can it take this long to re-open the road?”

The tweet is fairly on-brand for Clarkson who doesn’t shy away from controversy with his forthright ‘no-nonsense’ views. Two days after being posted the tweet had more than 4500 Likes, and 189 retweets and an unscientific look through responses showed that many seemed to disagree with him and support the Police in taking time to do a job properly. Since this incident Clarkson has tweeted about other road closures and the length of time needed to investigate – not that he was claiming to be personally inconvenienced on those occasions, merely sharing his remote observation – with his view that once injured are dealt with the priority should be re-opening the road. Responses seemed similarly tilted toward closures being necessary and reasonable, investigation and establishing cause necessary legally and emotionally to the family, with spoof account Bullshire Police even created a handy infographic for forces to check whether they had the presenter’s approval to do their jobs.

But in a situation such as this – where there is challenging work to be done by front line officers, and compassion needed for those involved and those around them who will be directly affected but a tweet has gone viral or had a huge reach and impact  – how could, or should, you respond as a public sector organisation?

Five ways to respond to negative and challenging tweets

In no particular order – and with recognition that the best response may be subjective to the situation at hand – here’s five ways a public sector organisation could respond when a high-reach or high-profile account calls them out on their work.

Ignore it and give no response

There is always the choice not to respond in situations where a negative comment about your work has been thrown out on social media. When and how to respond will be decided on a number of factors: is the comment based on false or bad information which can be corrected? Is the comment legal? Is the person asking a question or addressing your organisation directly with the expectation of a response? And what is the potential reach of the comment?

Whether you reply directly to individuals or not putting the right information out in a timely fashion on the right channels should be a normal part of how you work. Where there is a larger-scale or wide-spread emergency it may not be practical to respond to individuals and better to proactively tweet updates and correct information. If the comment is the sort which comes up regularly it may be something to have a pre-prepared response stored so whoever is on duty can send out as needed.

Where you don’t respond directly you may find others advocate for you – the original tweet by Clarkson was responded to by more than 1000 tweets and many of those were calling him out and showing support for the police. In another situation it may the negative comment gets no replies or traction at all – in which case sometimes letting it wither when starved of the oxygen of online attention may be the way to go.

For the organisation responsible there is often little option but to reply plainly and factually from their official account. If the tone of voice is fairly formal and organisational line is for brevity and facts then responding to in any other way would cause more problems than it solves (internally, if not externally). If there’s a little more leeway in your tone and approach then one of the other options may suit but this approach acknowledges the tweet and defends the work being done without being defensive.

Kensington and Chelsea Police, the attending force at the scene, kept their reply friendly and factual when they responded around an hour after Clarkson tweeted. They said: “Hi Jeremy, we’re sorry this may have caused delay to your journey. Due to the serious nature of the collision, our collision investigation team have to carry out a full forensic investigation which can take time. This is so we are able to provide accurate evidence at court.”

For frontline organisations there are likely to be a number of scenarios which don’t trigger your crisis comms but come up fairly often and draw attention from the public – such as this fatal collision. It’s worth pre-preparing statements into which incident specific detail can be put so responses can be given quickly, accurately, and possibly many times over. Some social media management platforms let you store these and the sign-off from above so if this is something which sounds handy it’s worth looking out for the feature.

There were those calling Jeremy out on being insensitive with his tweet given someone had died and asking him to imagine how he would feel and what he would want in a situation where it was one of his loved ones involved.

SgtTCS – a control room sergeant and social media consultant behind the #DontStreamAndDrive campaign – tweeted to his followers a more emotional response based on his first hand experience of working fatal collisions. He said: “Sorry you were delayed @JeremyClarkson – perhaps you’d like to come with us and personally explain to the family of the deceased that we didn’t investigate the death of their loved one thoroughly because you wanted to get home? That their loss is a complete irrelevance to you?

This wasn’t the only invite Clarkson received to accompany officers attending collisions with forces, officers and press officers all extending the offer following his tweet, bridging the gap between emotional and educational responses.

Human comms is the best comms, especially where it is openly and honestly tackling the most difficult subjects. There is still somewhat of a taboo around death and grieving, especially in circumstances where the death was unexpected. Far from being intrusive shared experience can begin to open up that conversation and help us to connect with each other as people, as well as gain understanding of the work emergency services do.

A number of working officers took the opportunity to share their experiences, and offer some education to those looking for it, into the work the emergency services do on the scene of a collision and afterwards with the family and friends of those involved. Open, honest, humble, kind – all words which can describe the way officers have blogged about this work – but so too is the brutal reality of what they see day in day out.

Sgt Harry Tangye, of Devon and Cornwall, was one who took the opportunity to try to educate Clarkson and others who may have shared his frustration at this delay or around other collision investigations elsewhere. His tone was reasonable and open when he replied: “This subject comes up a lot @JeremyClarkson so actually I think it’s a reasonable question. As an SIO of fatals for 15 years having attended over 150, I wrote a blog to explain it. Hope it helps.” He then shared a link to the blog post which is well worth your time, you can read it here.

There were a number of blunt shut-down tweets in response to Clarkson – although most of these came from individuals.

TraumaCopUk responded in the forthright and no-nonsense tone which Clarkson usually employs himself. The tweet read: “Well Jeremy, as much as I’d like to drive a banger through Borneo, & crash things into caravans or whatever it is you do; my job is finding out why the broom broom crashed & the people are crying. Tends to be complicated. Frustrating too, enough to make you want to punch someone!”

Could an organisation respond in this way? Perhaps if their tone of voice was established but its less likely to come from an official account. However, trusting frontline officers to respond in this way brings in the human comms again. Clarkson isn’t the only one frustrated – those feeling the need to justify their work and the way they go about it are too and sometimes that will show.

What is the best way to reply to negative comments on social media?

There is no one-size fits all response to negative comments on Twitter or elsewhere on social media. How your organisation responds may be down to how you are using the channels generally, the tone of voice of your organisation, the situation the comment refers to, and the commentator themselves.

What is important is to prepare what you can in advance – regularly dealing with situations where you get negative comments then have statements signed off in advance and ready to go – and have a framework in place for assessing quickly and confidently what sort of response is most fitting (although Bullshire Police’s spoof infographic may not be exactly the working document you need here).

If you need some help with content, communications or getting yourself and your team up to date on latest social media, analytics and digital skills get in touch and see how I can help.

And don’t forget if you want to brush up your Facebook skills I’m running full day workshops with Dan Slee on all things algorithm, Pages, Groups, Ads and engagement – dates in Edinburgh and London coming up in the next few weeks. Details here.