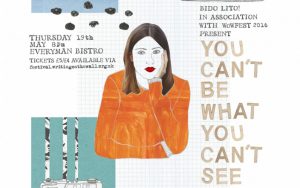 It was my pleasure to be part of a panel in Liverpool on Thursday night on ‘You Can’t Be What You Can’t See: The mis- and under-representation of women in music’, in my capacity as editor of Louder Than War.

Hosted by Liverpool music paper Bido Lito as part of the city’s Writing On The Wall Festival, alongside me on the panel were Laura Snapes (contributing editor to Pitchfork, former editor at the NME and writer for publications including Uncut, the Guardian, Wire and more); Lorna Gray, music journalist and founder of intersectional feminist girl gang Fierce Babe Network; and we were chaired by Amy Roberts, co-founder and editor at feminist pop culture blog Clarissa Explains Fuck All.

The bistro underneath the Everyman theatre was packed and it was a great discussion covering whether blogging is important or helpful to getting started in music journalism; how we support and champion female voices in music writing; how we cover the female experience of music without reducing or limiting; and how we can challenge publications and editors who favour male writers (and indeed, male music).

I really enjoyed the discussion and hearing the experiences of the other panellists, so similar to some of my own and yet very much individual to us all too. There were some great and challenging questions too which got me thinking deeper into my own situation, but also about privilege and societal systems. A worthy discussion and one which I hope continues beyond this panel, event and festival.

It was the question about how we challenge publications and editors on equality and diversity of coverage and contribution that has stuck with me and turned over in my mind in the last couple of days. This is perhaps because it’s something I experience from both sides – as a female writer, but also as a editor.

Listen for the small voices

There is a responsibility on both sides to challenge and change the status quo with this. As a writer I must keep pitching and improving my craft, calling out unfair treatment where it exists.

As an editor the responsibility is even greater, and more challenging simply because of the volume of the world we’re operating in now: I must listen for the small voices.

Those will privilege have the confidence of ingrained social structures to raise their voice above the melee, to keep knocking on a door which perhaps isn’t fully open. They find opportunities at publications where the door isn’t just closed but locked and barred to others. This is not to discriminate against good work but rather to curate a space where more can add their voices to those writing about music and culture.

This is to listen not just for female voices but for those from all sorts of different backgrounds, from all people, all places. It’s to make the profession and the canon stronger through positively supporting diversity.

It sounds so obvious, right? Perhaps, but if it really were, and it were also easy then we’d be making much better progress toward this than we are.

Louder Than War is listening

I’ve discussed this many times with Louder Than War’s editor John Robb and have done so again in the last few days.

Our manifesto still screams for young talent to sit alongside our more experienced writers and for the pieces we carry to be informative, informed but also emotional – an element missing in much of a field of journalism covering an art form which elicits emotion. While not explicitly stated we actively want writers from different backgrounds – gender, class, race, and more – as we believe diversity makes us all better.

Very little will change without continuous challenge. As a woman in the music industry, as a female writer and as editor of music publication it’s time to commit to further, focused, action to really start to see those changes.

There’s a good overview of the whole You Can’t Be What You Can’t See event on GetIntoThis.

I’m rubbish at approving and replying to comment on here but do leave one, or come and find me on Twitter.

You can read my words about music on Louder Than War here. You can hear me on the radio every Tuesday night as part of The Rumble with Pete Darrington – Tuesdays 8pm on Radio Andra.