The last day of September is here and it’s a time for me to slow the spin of the whirlwind and reflect on what has been quite the month for me personally and professionally.

It’s seen a trip to LocalGovCamp; the launch of Louder Than War magazine; the launches of a new website and a school’s extranet from the Digital First project at Nottinghamshire County Council; and my first outing on the international conference circuit with a trip to Stockholm to deliver a keynote for the WEBBOS event.

And my Noble and Wild side got a look in too as I topped and tailed the month with trips up to York for some Ruby Tuesdays magic with Chris Helme.

It’s been exciting, challenging, tiring and utterly wonderful in so many, many ways!

Louder Than War – proving that print’s not dead 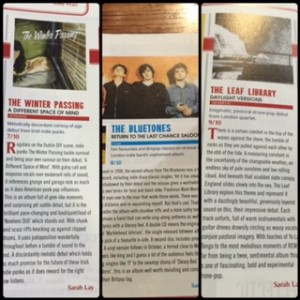 I blogged earlier in the month about launching Louder Than War as a magazine focused on classic indie and alternative music (available through WH Smith, independent newsagents or order online).

It’s a pleasure to say that the first issue has sold well and excited a lot of people (not all the people mind) about the possibilities of offline music journalism again.

This means it’s just the start – there’s lots of things we want to build on in future issues of the magazine, bringing more of the Louder Than War ethos and spirit to the printed page. For me this particularly means actively working toward a better gender balance, greater diversity and championing new bands as well as celebrating more established artists – all key parts of the Louder Than War manifesto.

We’ve already started work on issue two and I’m excited to be working on some interviews for the magazine as well as spending some more time over the next couple of months on reviews and features for the website.

I’d love to hear what you think of Louder Than War – online and in print. You can email me at [email protected]. 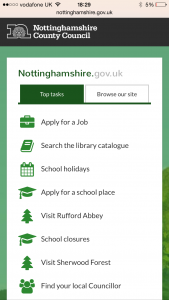 It’s also been great to see a couple of key milestones with the Digital First project I lead at Nottinghamshire County Council. I’ll blog about them more over on the Digital First blog as soon as I get a chance!

I want to just mention them here briefly though – the transition from beta to live of the new nottinghamshire.gov.uk and the launch of a new schools portal. Early days for both but we’re pleased with how the launch phases for both have gone and to see the work done under Digital First in a live environment.

For me it’s been a pleasure to work with the delivery team and to see individuals brings experience and skills to the project, but also to grow as we discovered and developed the discovery. I’m really proud of the team at Nottinghamshire right now and have every faith that they’ll continuously improve through the rest of the Digital First, just as our sites will do now they’re live!

I blogged about LocalGovCamp after attending in early September but just wanted to give another quick mention here.

Organising an event of this size shouldn’t be underestimated and after handling it on behalf of LocalGov Digital in 2014 and raising the sponsorship for this year’s event it was with only a little sadness and a fair amount of relief I handed over into the capable hands of local event team. All power to Nick Hill, Phil Rumens, Diane Sims and others who kept the event on track so it actually happened and ran it brilliantly on the day.

I still believe that LocalGovCamp is a vital event for the sector, just as LocalGov Digital (in some form) is a vital network. I hope that we’ll be able to take the event forward in 2016 and that the network come together to make that happen – many hands make light work and I think this is what LocalGovCamp needs. For the community, by the community.

The last couple of days have been an adventure. After not flying anywhere in a decade, mainly because of a fear of flying, I made it over to Stockholm in order to deliver a keynote at the WEBBOS conference. I’m massively pleased that I did!

Hopefully the Digital First story I shared was useful to the delegates at the conference and although I was sad I didn’t speak Swedish so I could understand the other speakers (totally a failing on my part, no-one else’s!) I learnt loads through going on the trip.

I learnt that fear isn’t insurmountable, that previous experiences can shape you but it doesn’t have to define you, and that a terrifying yes is much more rewarding than a resigned no.

I also found out that Stockholm is an absolutely beautiful city – I had a wonderful walk at dusk around Gamla Stan (the Old Town) enjoying the narrow medieval streets and ornate buildings. As my first time in a Scandinavian country the one thing it left me sure of is that it won’t be my last.

It’s with massive thanks to Nina Eriksson and the Web Ability team for inviting me to speak and organising my stay, but it’s also with thanks to Carl Haggerty for suggesting WEBBOS may enjoy the Digital First story and for coaching me over the last few months (a massive part of me saying yes to the trip!).

As mentioned we’re already working on issue two of Louder Than War magazine, and work for the website continues as always. Digital First is moving forward with the next phase on the website project but also with other work streams. I’m scheming trips overseas next year now I know I can make myself get on a plane.

But October will also see some more work with Noble and Wild (well, that’s the vague intention anyway) but also on the authoring side.

I’m really excited that I’ll be reading a chapter from The Winter Passing at the literary-themed second meeting of the Geek Girl Brunch in Nottingham. I’m terrified too, obviously! I hope that others will enjoy what they hear as my first novel moves along its journey to publication.

September was the start of lots of things, and the exciting thing about that is it means there is still lots more to come!

Find my words about music on Louder Than War or more about Noble and Wild here.

For more about my novels check the Riley Reynolds blog.

Get involved in LocalGov Digital and LocalGovCamp 2016 here.