Or, to put it another way:

The first rule of this write club is that there are no rules.
Louder Than War manifesto

Today marks a big change in the UK music press. A seismic shift in the way you can get your hands on music journalism printed on actual pages. No, not the NME going free…I’m talking about something much more interesting.

For today a new publication will hit the shelves of newsagents across the country and will be pushed through letterboxes across the land. And I’m terribly excited to get my hands on it, to take a deep breath of that heady news print.

Today, the first issue of Louder Than War is out in print. 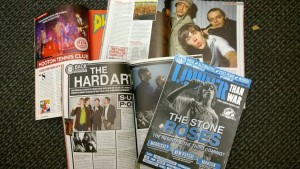 Louder Than War has been online for a few years now, a fast-growing site that is infused with DIY spirit.  I’m the sole sister in the editorial brotherhood and it is, for the most part, a position of joy and wonder. Yeah, it’s also laborious and annoying at times but that is more than balanced by the pleasures of being able to write about music, to live and love music so wildly as I do on that site. It’s an honour to be part of the tribe of writers, editors and photographers that make up Louder Than War and to feel the passion for the music, the devotion to the counter-culture, jump from every post.

And now, while the traditional music press decides survival lies in becoming free at point of pick up, we’re experimenting with print in a different way.

Louder Than War magazine will be a quarterly publication and operationally, sits slightly to one side of the website. We’ve teamed up with the publisher of Big Cheese and Vive Le Rock and this has meant offline a new tribe has formed to produce the editorial. But John Robb is chief of the LTW tribes whether they are online or offline and the love of music feeds them both.

My part? Being Features Editor online keeps me plenty busy but I’m really pleased to say I’m also an Associate Editor in the offline tribe. It was a pleasure, and once again an honour, to be able to write some reviews for issue one too – I got some amazing records to listen to including The Bluetones, The Winter Passing, The Leaf Library, Nicolas Godin, Blank Realm, The British IBM and We Hunt Buffalo.

What did I learn from working on the first issue? Well…

I haven’t yet seen a full copy of the magazine and for the first time in nearly two decades I am impatient to get the newsagents and get my hands on some music press.

I really hope you’ll pick up a copy and enjoy how we’ve carried the spirit of the website into print. I really, really hope we get to carry this fun forward and bring you an issue two.

See you tomorrow at the news stand, yeah?

You can buy Louder Than War in WHSmith and independent newsagents. If you need to find your nearest WHSmith you can do so here or you can just order the magazine online and have the postie bring it to you. Follow the magazine on Facebook for the latest news and to let us know what you think.

I’m sure y’all already know where the good stuff is at – but if we’ve passed you by then check out the best music website around: Louder Than War. We’re on Twitter and Facebook too.

I write about music for Louder Than War. I’m features editor on the website and an associate editor for the print version (issue one out 17 September – buy it in WH Smiths, independent newsagents or order online). My words about music are here.

I also do music PR and promotion and occasionally share music-related things over at my little agency, Noble and Wild. You can also find us on Twitter and Facebook.

And because so many people asked me about it today – yes, I’ve written a couple of novels this year and yes, my pen name is Riley Reynolds. You can catch up on where that is all at on my other blog or (you knows it) on Twitter.