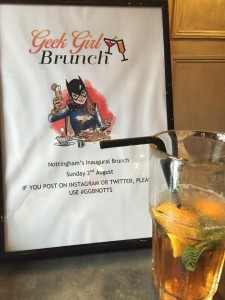 It’s my birthday today and it’s been an absolute beauty. I’ve been lucky enough to be spoilt by my family and friends as well as be able to hang out doing a few of my favourite things, with a few of  my favourite people.

On top of all that it was the inaugural Geek Girl Brunch Nottingham today.

Geek Girl Brunch is an international network of in real life meet ups that “hope to create a safe environment where identifying geek girls can be themselves to give voice, network, create friendships, inspire each other and hang out!” They say Geek Girl Brunches begin with  “kindness, tolerance, acceptance and empathy” – something we could all always have more of in our lives! I’d be wanting to go along anyway but add to the mix that the founder of the Nottingham chapter is my good friend and ultra-geeky-girl Kelly Race and it was an event I was pretty much bound to be at.

Am I a geek? I’ve never really been sure but today gave me a couple of reasons to reflect and think about whether I self-identify this way, and whether it’s a positive thing (spoilers sweetie – I conclude I am, I do and it is).

So – what is a geek? Let us turn to Wikipedia for a definition:

The word geek is a slang term originally used to describe eccentric or non-mainstream people; in current use, the word typically connotes an expert or enthusiast or a person obsessed with a hobby or intellectual pursuit, with a general pejorative meaning of a “peculiar or otherwise dislikable person, esp[ecially] one who is perceived to be overly intellectual”.[1] Although often considered as a pejorative, the term is also used self-referentially without malice or as a source of pride. Its meaning has evolved to connote “someone who is interested in a subject (usually intellectual or complex) for its own sake”.

So it can be an insult, or a pigeonhole or it can be a self-awarded badge of honour. For me it can only be a positive thing (whether reclaimed or attempted as an insult) because it’s essentially identifying someone who has passion, who loves the possibilities of a thing.

And in the internet age where a million flowers have blossomed and niches have become the mainstream geek is now essentially becoming a synonym for ‘people’.

Am I a geek? Yes, totally. But only on the edges of the way it might traditionally be thought of. I like comics, and superheroes and there are a few shows / books I am infinitely interested and love the fandoms of (Firefly, Harry Potter, Doctor Who, most things contemporary fantasy and dystopian future).  But my real deep geek tendencies are saved for music (and yes, the medium of vinyl) and digital stuff in local government.

Would I be the right kind of geek for the Geek Girl Brunch? There is no ‘right kind’ – we’re all just passionate people who want to share our love of something and have another love shared in return.

It’s actually not the ‘geek’ bit but the ‘girl’ bit that caused a pause – I find gender a hindrance when used this way, as an exclusion as much as an inclusion. For me we’re all just folk and should rub along that way. However, I’m not so naive that I don’t realise that some women are more in need / want of a single-sex space to speak freely. I’m good with that. 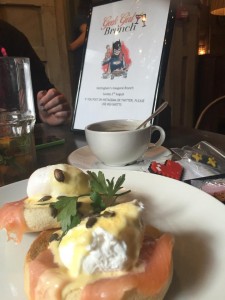 I’m even better that actually this is a fairly fluid label for this network anyway – they describe it as including “Identifying women (which includes transgender women), gender fluid and non-binary people as long as they are comfortable with the “geek girl” label. All gender events do occur, but they are scheduled at the discretion of each chapter.”

I’d love to think that as we head toward equality that we’d move to ‘geek brunch’ and then just ‘brunch’ (because we’re all just folk who want to get together to eat and chat). That’s not where we’re at though and so Geek Girl Brunch seems like a pretty perfect starting point.

It was an absolute pleasure to be at the inaugural event in Nottingham and I’m already excited for the next meet-up and chatting with more people about the things they love (and eating another delicious brunch, obviously). It was an amazing way to spend my birthday – and gave me a great excuse to mooch around the corner and indulge my geeky tendencies at Mondo Comico, Music Exchange and Rough Trade.

So self-ideintifying geek girls of the Nottingham / East Midlands area – next meet-up is muted for October, see you there, yeah?

Thanks to Kelly, Anna and Emma for organising and thanks to those that donated goodies for the give-away today – I won some amazing jewellery from Sugar & Vice and Down the Rabbit Hole.

You can find me on Twitter or read my words about music on Louder Than War and even more music stuff over at Noble and Wild. And because I hadn’t found the story I wanted to read I wrote it – follow me at Riley Reynolds for the little ‘verse I’ve created for my first novel, The Winter Passing.