After the best part of a week with rampant tonsillitis I headed into my second coaching session with Carl Haggerty more subdued than I perhaps should have been. Or maybe it was serene because looking back over the last few weeks the first conversation was the first explosion in a chain reaction which has changed things for me in a quite significant way.

In that post I said said something had to change, and something surely has.

First though, a little recap on the themes which emerged from the initial session:

Revisiting this I was able to match up some of those themes with my thinking over the last month and see progress in some of the areas.

My thinking has been helped by a Coursera I’ve been taking in Design Thinking for Business which has really helped to consolidate shine a brighter light onto some of the areas coaching is exploring, but also helped me start to focus on the medium-term future. But it’s also been helped by the ripples the coaching conversations set off and by honest, open conversations with a few other people (most of them, coincidentally, called Carl). And finally, an opportunity opening up at work helped me fit all these pieces together into a full colour picture of who I am.

So, something has changed and that change feels really good. I know myself a little better thanks to the exploration coaching encouraged me to do.

Specifically most of the last month has led to thinking and realisations about courage, catalysts and change – some of these are directly related to me (and I’m not going to blog that here) but some of it is more general to the area I work in.

Yesterday I talked to Carl about my thoughts on these on my terms – by using superheroes and symbols to describe the roles disrupters play in change. 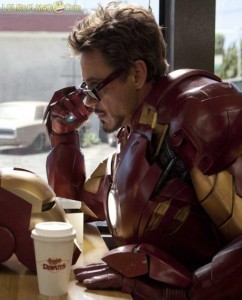 I read and watch a lot of books and films about superheroes and the supernatural. I indulge even more in sci-fi and dystopian futures. I love the escape to an imagined place, a world created completely in someone else’s head that I can then inhabit for a while. But I also love the very human, the often familiar stories which are told in these fantastic worlds, these dark futures. I love the symbolism that is often woven into a character and played our through their story.

It makes sense to me to frame my reflections in the worlds and characters I am familiar with, to double-up and use their symbology to fit my story.

So, let’s start with Iron Man. Iron Man is cool, right? Tony Stark can sometimes be a dick but Iron Man, Iron Man is cool. He gets stuff done. It’s a fault and a feature that Stark doesn’t see any limits and will use his brain (and alright, his money too) to create what he needs (a mega cool armoured flying suit) to allow him to get right in there and force the change he wants to see.

When Tony Stark puts on the suit and becomes Iron Man he is the change in the situations he turns his attention to. Which (and let’s not get into a thing about good / evil / war / peace etc) is cool. It’s practical and proactive. It gets stuff done, (mostly) single-handedly (The Avengers – to my reading – are a fairly dysfunctional team who mainly don’t get in each others way rather than really being better together).

But when Iron Man isn’t around, when Tony Stark is off being a ‘genius, billionaire, playboy, philanthropist’, well then action/change stops. As with most superheroes the communities they save become victims of circumstance when the hero disappears. Superheroes make big, visible, cool, change but most of the time, that change stagnates when the hero goes away. 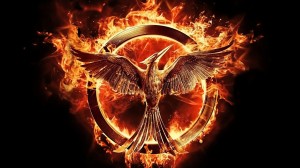 Throughout the Hunger Games series Katniss is a girl who initially uses her skills to deal with an immediate (in this case extremely hostile) environment. Her motivator isn’t change, but survival. Almost accidentally she becomes a disrupter and throughout the story becomes a symbol for a wider change.

This new role, as The Mocking Jay – the symbol of a rebellion, Katniss initially dismisses as a role she neither asks for, nor wants. Focused on her own goal of survival she is unwilling to see the power she has to inspire radical change in others. In fact, it’s not a role she has much choice in and others who can see the acceleration she will bring to their agenda wield her as a symbol while she remains focused on direct skills.

Eventually though the change around her can’t be ignored and Katniss starts owning her role as The Mocking Jay. Crucially, as the symbol of change, she sees she was the catalyst but is also just one part of a wider movement. Through inspiring the rebellion she has created many Mocking Jays, a (in this case violent) but more sustainable change.

This idea of the superhero and the symbol can be used an analogy with my own development and career; with having been a practitioner doing hands on delivery to moving toward more senior strategic roles. It can be used to explore the climate around change in local government and how lone disrupters are important, and deservedly get support and kudos, may not be the significant player in long-term successful transformation of the sector.

Yesterday’s conversation also took in self-limiting beliefs and ways to recognise and deal with these; more gentle exploration of where I may want to be in the medium to long-term future; and the importance of empathy as an approach and a skill (more of this in other posts I think).

As much as you can after a few days of bed rest and antibiotics it once again left me feeling energised but also reflective. It’s a real privilege to be having these conversations with Carl as my coach, but also as a fellow disrupter.

After just two sessions I can see tangible, positive change to the way I think about myself, my work and my impact on others so have every hope that over the course of our remaining sessions (between now and September) that positivity will continue to grow and help me through this transition period of my career.

Our next conversation with focus on the theme of visibility, resilience and balance. Thanks as always to Carl Haggerty for superb coaching, for his time and finding my brand of weirdness fascinating rather than ridiculous.

You can find me on Twitter or read my words about music on Louder Than War.