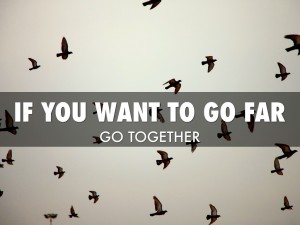 Probably everyone knows the story of the network by now, but it bears repeating. On the second day of UK GovCamp in 2012 Carl Haggerty and I sat in a reflective practice session (in this instance also known as a dimly lit room) and reflected with Jeremy Gould and Dave Briggs about the evolution of govcamps to that point. And we shared our thoughts on the then box fresh GDS; our ideas, hopes and fears about what the Government Digital Service could mean for local government as a sector.

We wanted to recognise the expertise in local government, we wanted to get those people (and the people outside of the sector who were passionate about it) doing better things. At our loftiest ambition we wanted to change the shape of local government and certainly seal this rift between ‘digital services’ and ‘real life services’ – it’s the same thing and it needs designing well.

This could have been another GovCamp rant that spilled onto Twitter as we took our journeys home. It could have been a lot of talk that made us feel better for having said it all out loud and connected to each other, but then failed to go further and prove any real, practical worth for the sector. Sarah Jennings, then at the LGA and now just starting a new role with DWP, deserves great recognition here for organising us and making sure that we stayed focused on our ideas enough to get other people together and commit to taking practical action to turn those thoughts to reality.

That was in early-2013. And here we are, two years later, meeting with the currently active members of the LocalGov Digital steering group in Huddersfield.

Why Huddersfield? Well, today (7 February) an amazing thing is going to happen in Huddersfield. LocalGov Digital’s democracy work stream (led by Carl Whistlecraft and Dave McKenna) is holding the Not Westminster – Local Democracy for Everyone event. This ground-breaking (yes, truly are discussions of this kind around democracy so rare) brings together people who are positive about local democracy and are up for the challenge of changing the big things, and the little things, that would make the system better for us all. Just think about that for a moment – that is really…just…YES!

It’s really hard to organise an event, and it’s even harder to organise an event for which there is little precedent (“come on sponsors, give us your money and just have faith our idea will work”) while also doing an unconnected day job. Huge props to Carl, Dave and the whole team of folk who’ve got behind Not Westminster – from sponsors to attendees and those behind the scenes who’ve put all the little pieces of the event together. Whatever comes out of today you’ve already done an amazing thing.

But, talking in the steering group yesterday, I think more amazing things will come out of the event. That, in the LocalGov Digital way, it’ll lead to thinking, doing and sharing. There is huge things happening in each of our work streams as distinct areas – Localo and Pipeline in LGMakers, Not Westminster in LDBytes, the coaching and mentoring push, LocalGovCamp 2015, open data networks and projects, daily links to interesting stuff, bringing together the Voice of the sector. Again, this shouldn’t be under-estimated as a result when we are all essentially volunteers doing this on top of our day jobs because we’re so convinced it’s a needed change in the sector that we can support happen.

There is real potential that we cross these streams (despite standing advice to the contrary from Venkman and co). That the ideas that come out an event like today around democracy, lead to Makers supporting the development of a tool and Jamie Whyte and Lucy Knight bringing its data out  into the open. That is really possible and really significant. The sector creating positive change for itself.

As a group we’ve had to take occasional criticism and questioning about the pace at which we are able to effect this change, asked often if we are frustrated by the speed at which we’re actually making things better being too slow. Yes. But also no.

There is a certain amount of being kind to ourselves as individuals throughout the whole network (and it is so much bigger than the steering group, we are the tip of the iceberg, just the bit you can see) because this isn’t anyone’s job – LocalGov Digital is grassroots and voluntary and we all have stuff we are doing elsewhere.

It is also that proverb – maybe we could go fast if we didn’t bring ourselves together as this burgeoning movement but speed isn’t the primary objective here. It’s desirable and change is much-needed, the sector can’t afford to wait long. But as LocalGov Digital we want to go far, not just fast. And to do that we must go together.

Huge amounts of positive vibes headed to Not Westminster today – you are changing things just by getting together. I’ll be following on #notwestminster as I head home to be mummy for the weekend.

You can also find me on Twitter and blogging on digital for Nottinghamshire County Council. If you prefer my words about music they are on Louder Than War.