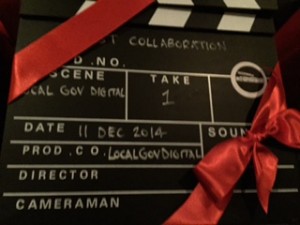 Collaboration (noun):
working with others to do a task and to achieve shared goals; the action of working with someone to produce something.

It was the inaugural Comms2Point0 UnAwards today and I’m thrilled to say LocalGov Digital was named as a winner in the Best Collaboration category. I don’t think there could be a more fitting award for the network, the grassroots movement founded on collaboration and pushing forward change in the sector on that basis.

The award comes at the end of LocalGov Digital’s second year and over the last 12 months there’s been masses of progress made by those who form the network. Pipeline, Pulse and Localo have all been created and are now in use, we held our first LocalGovCamp, we created Voice to bring together the debate from the point of view of those blogging about it, we started work around open data, and we started holding Digital Democracy Discovery Days.

Carl Haggerty and I hatched the idea of LocalGov Digital in a dark room at GovCamp 2012 (Reflective Practice, room 12) but we are not the network.

We are all LocalGov Digital.

All of us who are working in or around the sector and who are passionate about doing digital better. All of us who Think Do and Share. All of us who’ve had an idea and informally or formally joined up with someone else to see where it could go. All of us who think collaboration could be part of the future for our own roles, our councils, our communities and the sector.

We are all LocalGov Digital and this award recognises that. Whether you’re leading a workstream or following the debate quietly online, tonight you can reflect that they are all important parts in the movement and we can only grow from here.

And now some thanks and congratulations…

There’s a huge amount of work that goes into organising an event so props to Dan, Darren and Emma for their work to make today happen. Also, thanks as always to the sponsors who make these things possible.

Congratulations to Government Communications Service who were named as joint winners in this category.

Now something you can do…

You can get involved in LocalGov Digital in some way – of course – but there is also something practical you can do if the festive spirit of giving is upon you.

I was touched to see that Comms2Point0 had one award named in memory of someone who’s work and ideas about local government and digital I still miss: Dan Harris.

Although he left the sector Dan was still involved in the debate and sharing his knowledge online and at events. He was a great guy with a fantastic outlook and I feel sure he would have wanted to have a say on LocalGov Digital if he was still around. Unfortunately he’s not, as Dan was killed while riding his bike home from work in August 2012. I still miss his ideas, passion and place in the local government digital community very much, and many others do too.

Comms2Point0 named the Lifetime Achievement Award in memory of Dan and set up a fundraiser too – donate to Nordoff Robbins (the charity Dan’s family said he would want to be supported). You can make a donation here.