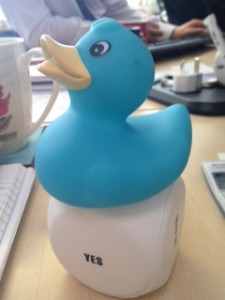 Integrated campaigns are a fairly standard tactic these days; the blending of online and offline elements to create a seamless campaign whole. But while sought after the cross-over isn’t always forthcoming. Which makes the current NottsTV campaign all the more impressive for having achieved it, and achieved it in high volume.

NottsTV is one of the new local TV stations and is due to launch at the end of May. A week or so ago their launch campaign got underway with the eye-catching blue ‘Ey Up’ ducks appearing on marketing around the city.

But these rather cute little ducks also started appearing around the city with the instruction on the bottom ‘If found, take a pic and share it!’ with the address of the station’s Facebook page and Twitter.

In a week the campaign had received 2 million views online – pretty impressive in a city which has a population of 306,000 (the population of Nottinghamshire is 1,091,500 but NottsTV are focused on and around the city). Check out #blueduck to see some of the pics people have sent in.

Why is the blue duck campaign so successful? 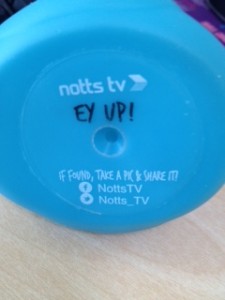 Well, it takes a remarkably simple idea and does it very well.

In the blue duck they’ve created a visual with local resonance ( for those who aren’t local, ‘ey up duck’ is your greeting round here and ‘duck’ your term of endearment) as well as a physical object that is quickly becoming a sought after item.

It’s the physical item – in this case the blue rubber duck – that is probably unusual in integrated campaigns with the on and offline being thought of in terms of channels rather that need to complement rather than spaces that need to cross-over.

It’s probably down to NottsTV having a savvy team in place that the creation of the object has driven the success in both online and offline channels.

And it’ll certainly be interesting to see how the marketing campaign translates to viewing figures once the station launches and to see how their brand develops in the city.

I think there’s five things (at least) that local government could take from the NottsTV success:

I’m in the shortlisted in the local government category of the Digital Leader 100 Awards. If you’d like to vote for me you can do so here until 2 June 2014 – thanks!

And if you like my writing with a more musical leaning you can find more of me over on Louder Than War.