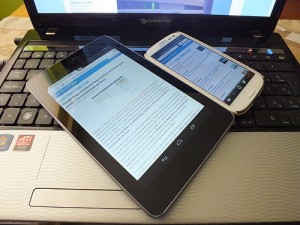 Is responsive design an interesting sideshow, taking up time and money that should or could be spent on basic readability and improving content?

This is the debate posed by Malcolm Davison of the Writing for the Web agency in his blog post ‘Forget Adapting for Mobile‘. His post came after some discussion on the topic on the Content Strategy Google group (that discussion in this thread).

The post contains some good points and a link to an interesting presentation with lots of good-looking stats about user behaviour across device. I can’t disagree that working on quality content is A Good Thing.

HOWEVER (there had to be an however, right?) while I agree with the underlying point of the argument posed in the post I’m not sure I can completely agree that responsive (or adaptive) design should be completely pushed aside as unnecessary frippery.

Since he posted earlier today there has been a lively thread running in the Content Strategy Google Group with practitioners trying to understand more fully the intention of the post and make their own views clear. If you’d rather you can dive straight into that thread here.

So, where to begin? Well, how about with the evidence that forms the basis for the post?

Looking into the Google research cited they state a number of points of context around how an individual may choose which device to use – the amount of time available, the goal or task in mind, location and attitude. They then add this context to each device (they use mobile to indicate smartphone, while laptop / PC are in together, tablets and TV). However, some critical thinking is needed around this research as there is little quantifying or contextual information about the data it presents. My thoughts that follow are based on assumptions of my reading of the research, the subsequent blog post and forum thread.

Is responsive design a ‘nice to have’?

I think 30% is pretty much the level of ‘mobile’ traffic that most local government sites are seeing at the moment. Unlike the report I use this as an accumulated figure of smartphone and tablet use. And I would question whether those devices are still used in the way listed in the report – for information on the go or to kill a bit of time (smartphone) and for entertainment (tablets). Why do I question it? Well, I don’t have a tablet but I do have a smartphone. My usage of that device is much higher than the 38% the report found, and I use it for everything. Am I unusual? Maybe. But that’s partly my reason for blogging about this!

Of the other devices I have access to I could choose desktop or laptop (I’m discounting TV in my case – we don’t have an interactive TV and view it infrequently. I accept I’m probably the exception in that case!). Whatever I’m doing (away from my day job) it usually starts on my phone. If I have to move to another device to complete the task I do feel as if something has failed and that my user experience is poorer for it.

And I have a choice. What about those that don’t? Is multiple device usage more common amongst urbanites than those in rural areas where broadband may be poor? And what about those from deprived backgrounds – maybe they have no device at all but if they do I bet it’s a smartphone.

Some of the tasks suggested in Malcolm’s post I would have to switch devices for – but I’d feel let down by the provider that I did. I would want to be able to complete them all from a smartphone (or tablet) as that is my device of choice.

And in the other direction, what about devices which aren’t widely used yet but may well become mainstream in the future? Wearable tech is out there now and there’s going to be all kinds of stuff we can’t anticipate fully right now. Is ‘mobile’ really just messy shorthand for ‘multiplicity of choice’?

All of this is part of why responsive isn’t just a nice to have or buzzword of the moment. You can pay lip service to it but you could also make a real and long-lasting, even futureproof, change to the way you work your digital content; by separating out the presentation level (responsive / mobile design) from structured content (mark-up to define what shows where when).

And what of serving content which is appropriate to the device? This isn’t really covered in the original post but, the thread headed off in this direction with some really interesting points around structured content and content mark-up as the way to serve the right content, in the right way, at the right time.

There were lots of posts about doing this via a CMS and the use of DITA. There were some glib explanations and there were some techy descriptions of how structured content could and should happen in the background, how it fits with business objectives and even the practical impact storing content this way would have on authors.

It’s the sort of discussion digital practitioners should probably have more (thinking of my own sector here, clearly discussions generally are happening) and in local government, perhaps it is time to help each other find ways that separate the presentation layer from the content, rather than letting technology define what we can or can’t do?

But how do we discuss this with the boardroom, the senior managers or elected members? They probably have no interest in hearing about the benefits of structured content. It’s a tactic that will help achieve an organisational goal. As with so many things it needs discussing in the right way.

And maybe mobile (as defined in the thread – not really about smartphones or tablets but a messy shorthand for the multiplicity of devices now in play – with more to come, Google Glass and wearable internet anyone?) is the way to phrase this conversation. With stats that traffic is coming from other devices, research on how your audience is accessing, their expectation and ability, discussing implementing a responsive design or ‘mobile-friendly site’ is the way in.

The discussion included this quote from Karen McGrane which summed my thoughts up well (thanks Karen for unknowingly helping me articulate some thoughts here!):

“Use mobile as a Trojan horse, as a catalyst to fix what’s wrong with your website and process.”

To clarify this Karen added in a subsequent post:

“I don’t mean because they care about mobile, we build a siloed website. I mean that we tell them, you want mobile, you need to fix your CMS, improve your editorial process and workflow, and create structured, flexible, presentation-independent content for reuse. You use mobile as your ‘aha’ moment to fix the underlying problem.”

No – it’s just one view which seems to look at presentation and content as one inseperable entity. In lots of people’s digital worlds – particularly around local gov I expect – that will be true. But there is another way and maybe we should be talking about that and moving toward it?

Image ‘Portatil-tablet-smartphone’ by Miniyo73 on Flickr. Shared under the Creative Commons licence.

Would love to hear thoughts on this – you can usually find me on Twitter or use me a comment below. And don’t forget <plug> you can my words about music over on Louder Than War </plug>.

11 thoughts on “Me first: Is responsive design a distraction from good content?”