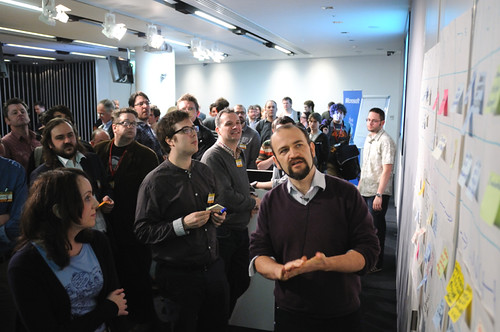 Friday and Saturday last week saw me at UK GovCamp 2012 (or #ukgc12) – the annual unconference for gov geeks, digital doers and people who just want to make public services and society better. It was, as ever, a mind-bending delight of energy, passion, ideas and camaraderie.

It’s been suggested by Dan Slee that we all post 20 thoughts or things we took away from the event. It’s taken me most of Sunday to get my head together but here’s my contribution:

I will try and write up some notes about both of the content strategy sessions I ran with Carl (well, I stood at the front with him) and give some pointers about our practical outcome from the Saturday session.

Thanks to Dave Briggs, Steph Gray, Microsoft, Lloyd Davis, the generous sponsors, Hadley Beeman and my very old friend Matt who now works in the Treasury for their respective parts in making GovCamp 2012 amazing (and successful for me) yet again. I’m already looking forward to UKGC13.

5 thoughts on “The mind-bending brilliance of UKGovCamp12”