I’d sort of forgotten I was meandering through this series about my online life to be honest. Then, last night, the subject of this installment played out as part of my dream. It didn’t play out in the dream exactly as it had in real life. Because in real life I have never run a library the size of the Raiders of the Lost Ark warehouse on a Navel Destroyer with Graham Coxon. I really haven’t.

In reality this bit of my history happened in a caravan near Paignton with precisely no members of Blur present. So what am I rambling on about? Well, the first time I got a text message to my mobile phone of course.

I’d been given a mobile for my birthday back in 1997. I was the only one of my friends to have one. It was massive. And clunky. And I was only supposed to use it in an emergency. It made me feel very jet set.

It was a full year before I got a text message though. I had to wait for someone else I knew to get a phone first. The great event happened while on the annual holiday on the English Riviera with my best mate and her family. The brick of a phone made a strange noise. There was an odd message about ‘Incoming SMS‘ on the screen. I was excited but also already planning how I could break the news to Bill Payer (my dad) that the phone had spontaneously broken itself.

Anyway, with friend peering over shoulder we accessed the message. It looked like it had come from a phone number abroad. This was getting more exciting and mysterious. What did it say? 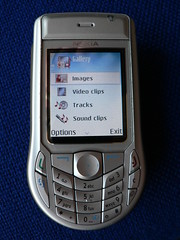 Well, something along the lines of ‘Thinking of You!” It might have been miss you. I don’t think it was as profound as love you. The memory of the message is lost in the excitement of the thing.

It was the cause of much discussion and exploration of possibilities as we mooched about in rock pools and got ready for karaoke at the on-site pub (we did Relight My Fire if you’re interested). My wild imagination was abruptly harnessed when the boyfriend-of-the-time called that evening and asked ‘did you get my message?’. This was still wonderful – we were / are both geeks and he’d found a new gadget-type activity. It wasn’t as exciting as the story I had built up which was near to last night’s dream about Mr Coxon and the library of the naval destroyer.

But that was it. The first SMS. And now, somedays, I send and receive up to 50. There are some people I only really communicate with by text. I certainly text more than I use my mobile to call. It’s everyday. In 10 years it has gone from being the alien to natural. Then I thought my phone was broken because it was trying to show me a message, now I think it is broken if I don’t get one. That quick transition into everyday life and parlance is yet another reason why I am in awe of online, and in this case mobile, communication.

Anyone else remember the first time they got a text? Or would you rather share a weirder dream than mine? And Graham, we really need to switch to the Dewey decimal system because a lot of the problems we are having on board are because we’ve created a totally mental categorisation scheme (but the thing we were asked for was in Archive 2 – you’d disappeared from the dream when I found it).

(Aside: This is the second night running a blog post has come to me in a dream. What is wrong with me?)