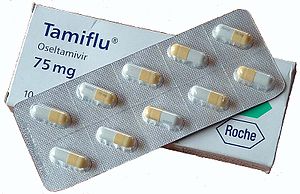 Image via Wikipediato sarahlay.com. We are currently closed due to swine flu.

to sarahlay.com. I’m currently closed due to swine flu.

No, of course I’m not. But I have been pretty ill with it for the last seven days. Ill enough that I took to my bed for pretty much five days solid – something which hasn’t happened since before my toddler arrived two and half years ago. Ill enough that at one point I didn’t check my texts or Twitter for around 30 hours sending at least one friend into a mild state of panic.

I am, of course, fine. I perhaps had it heavier than some or that could have been the Tamiflu. I may have had something else entirely as it is merely assumed I had swine flu because I answered yes to two or more symptoms on the list on the NHS Direct website. And then said the same thing when I spoke to my GP (I snook in just before the launch of the special website and number).

But a presumption was made about my condition, drugs collected by a dutiful husband (hastily nominated as my ‘flu friend’) and a week in a feverish sweat planning revenge on all pigs was thus spent.

Aside from the 30 hours where I was ‘off grid’ what did online and social media do for me this week? Well, it showed me the strength of some of the connections I have made, mainly on Twitter. Rather banally I announced my diagnosis on there as soon as the phone to the GP was down and was cheered by the ‘get well’ ‘good luck’ and ‘get on with it’ messages from people who I’m mainly connected to though the job I do. Easy to tweet off 140 characters (or less) to someone you don’t really know or care for on something which doesn’t affect you. Easier not to do that at all.

I think this was made even more obvious to me in the same week by the #freealncl campaign (@alncl suspended wrongly from Twitter). Same thing expressed in a more organised and passionate manner. People going out of their way to stand up in solidarity with someone that they may only know online (side thought: isn’t it funny that it only really took about five years for us all to become ‘them freaks on t’internet’?), have met a few times at professional functions or become aware of through someone elses network. Hashtags, @support messages, a Twitter petition and a Twibbon ensued. And after a number of days the account was re-instated and our network both expanded and grew a little closer.

It’s about solidarity. For me, confined to the house and in a loose quarantine it was about not being alone. It was about being able to see the world was carrying on and that I could jump back in and be a part of it when I was ready.

So, thanks to my ‘real-life’ (gonna have to re-visit that phrase soon as it doesn’t really fit any more) and my online friends who wished me well and worried about me this week.*

One thought on “Welcome”