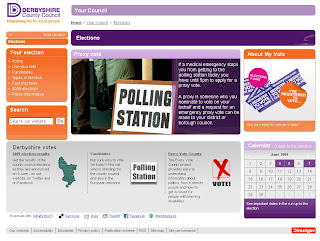 Today is polling day in the county council and European Parliamentary elections. It’s an important date in the calendar. Politically it could turn out to be a significant vote for this county. It’s will also be of significance to this team and the work we do whatever the political outcome.
In a lot of ways it feels as if this day has been a long time coming as planning and work on how we will cover the election on our website and in the greater online space began at the tail end of last year. In smaller ways I would still like a bit more time to tweak and improve and do even more than we have. But time and voting waits for no web team and so here we are: polling day 2009.

What have we done so far?

All of this has been going on for a number of months (not full time) and has been a learning curve and exciting project for this team to get into. For the first time we have had a significant presence internally in promoting and reporting on elections. It’s provided an opportunity for us to raise awareness of our work internally and work with colleagues in other departments to enable everything to happen.
Our results system will hopefully be the jewel in the crown of what we’ve done so far. We won’t know until the dust settles tomorrow and we have some feedback from Derbyshire voters, councillors, other officers and colleagues in the public sector who are kind enough to take the time to have a look.

What we can say about our results system:

These displays are also being used internally in our members’ room. On two pretty impressive big screens they will watch the results as they are announced via the virtual chamber and the county map.

So, this is what we have done and what we have in store. All that remains now is for the team to find time to go out and vote themselves and then some serious finger-crossing and possibly some flying-by-seat-of-pants action in the morning.
But, like the swan, we aim for everything to appear seamless on the online surface even if we are all paddling like mad underneath!
Counting in Derbyshire begins at 10am so keep a weather eye on the horizon for http://elections.derbyshire.gov.uk to ramp up and send us a good luck vibe, if you have one spare, for our maiden voyage in these waters.