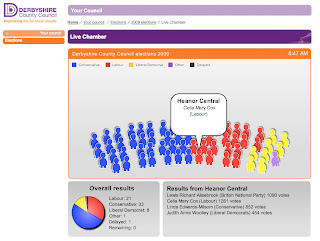 So, the dust is beginning to settle and while it will undoubtedly take a while for the organisation adjust to being under the control of a different party for the first time in 28 years now seems a good a time as any to have a look at how we covered the election in which they took the seats.
In my first post about election 2009 I looked at how we had set up a new section and added extra functionality and revealed what we planned to do as results came in. Our plan, very nearly, came together.
Our real-time reporting of events worked well as did the system we had in place for getting the results from the count rooms around the county to us at county hall.
Using Twitter and Facebook to publish the results also worked well. At one point (around 8.30am) it looked like it might be all we had to get the results out as we tackled technical problems, eventually winning most of the battles.
The problems did mean we had to jettison some of our content to get off the ground though. Sadly the detailed text pages organised by division were a casualty, as were some of automated functions of the system. But temporarily letting them go allowed us to fix the other stuff on the fly and get something out there.

What did make it?

What didn’t make it:

There were a couple of things in the run up to polling day which didn’t make it and a few bits of the results system which also remained dormant.

(Added 7 June) Looking ahead to the next elections I think we would look to do more work on the sort of systems we had this time, ensure that the complete picture of information could be presented and try to get the back office hook ups to work how we wanted them to. Beyond that I think the next step in development would be looking at online voting and widgets / other platforms (iPhone apps etc). I am sure there is lots we can do and we have four years to work it out!

And I think that’s about all I can say about elections. I am still a little emotionally charged from the adrenalin of working at such pressure yesterday and giddy with the joy of how well our team worked together on the day and in the run up. Now we just need to decide what to tackle next!